SEO 2012: A Look Back at Online Marketing 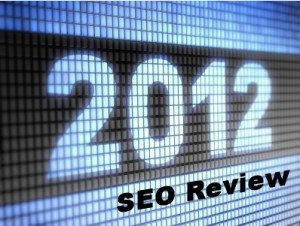 2012 was a big year of change in SEO.  Once again Google led the industry shake ups by changing their search algorithm and announcing long term changes that forced the SEO firms to change the way we do business going forward into 2013.

The SEO world was turned on its ear when Google’s Matt Cutts mentioned at SXSW in March 2012 that Google was working on an search over-optimization penalty.  For months SEO professionals bickered and discussed the meaning of the comment and the consequences if enacted, but it quickly became evident that Google was serious in its attempt to make the GoogleBot smarter.

As we start a new year, we look back on the changes Google brought to SEO in 2012 to develop our SEO strategy for 2013.   Google has shown a priority on helping high quality sites, with natural links, fresh content and social interaction reach the top of the SERPs.  All SEO professionals need to continue to move our clients in that direction to be successful.