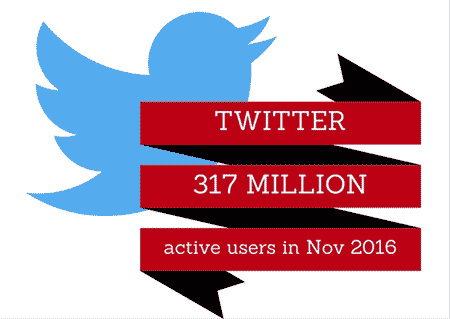 As the year closes, social media outlets are beginning to push out stats for the year. DID YOU KNOW, the social networking and microblogging service Twitter averaged 317 million monthly ACTIVE users? And that’s  an ACTIVE and an AVERAGE monthly number. According to Twitter’s posting on 10/27/16, they have logged over 1.3 BILLION accounts. Can you afford NOT to use it as a marketing tool?

Twitter allows their registered users to read and post short messages, so-called tweets.  With early struggles with monetizing the social service in the beginning, Twitter has gotten on top of things and is now a viable marketing tool. All the major social players, including new sources (local and national) and even sports teams, tweet every day. Some accounts tweet many times a day.

What do you need to join Twitter? All you need is an active email. time and some creativity. Users create a “handle.” For example, Bizopia’s “handle” is TexasSEO as that’s what we are known for around here. The account name is Team Bizopia. Why did we choose that name? Because multiple people post AS BIZOPIA on the account, therefore the addition of TEAM. Are there limitations? NO. Not at all. You can be as creative as you want.

Companies can use Twitter to communicate sales, promotions, or even stock/inventory information to it’s followers. The idea is to build Brand Awareness while communicating with current clients as well as finding new and potential clients. Are any topics off limits? Technically no. Scrolling through your feed can be overwhelming at times – you’ll get the picture pretty fast on how important it is to have creative content with creative, eye-catching titles/tweets and images.

The world is doing nothing but getting faster and Twitter is proof of that. It’s a network of things to read and discuss, just delivered in “short hand.” Give it a whirl, and let us know what you think!